A somewhat mysterious collaboration between three people from varying parts of the world is finally pieced together after being lost and found over the last two years. The final result being two stripped down and uncompromising tracks that go from Chicago to Detroit and beyond. Also included is Legowelt’s remix of Comeback Dust which takes the original and adds his signature Chicago Smudge sound to the mix.

Release number four on the scruffy militant wing of the beloved Popular People’s Front label. This time around we have a raw, stripped down and acid-fueled workout from Manchester’s Miguel Manzano. 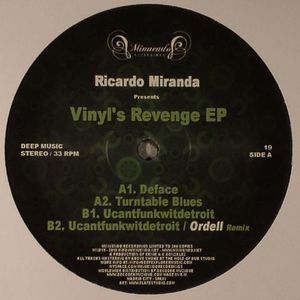 Minuendo pays tribute to the Wind City with a killer 12″ from Ricardo Miranda, boss of Noble Square. The EP comes with a great remix by Ordell as well.