After the club tropicana sounds of Bang the bomb its time to roll the sleeves up and get down to the business end of this trip. Touching down on planet Subturanus in search of the real underground shit Light sound dark do not disappoint digging deep into its core and excavating strange alien like sonics which had previously been lying dormant. Onyx ”Robot world” kicks things and what a start! hailing from Boston Massachusetts this 1982 cassette only release is almost completely unknown to all but a few. So ahead of its time with its production and ”Robots are taking over the world” drone vocal this is an absolute must for people who are fascinated with the history of house music and is surely worthy as a missing piece on the ever expanding jigsaw puzzle.

Three years in the making, Symmetry – the project that began as a conceptual tangent between Glass Candy, Chromatics, Mirage, & Desire’s more abstract sides – finally sees its release this month. “Themes For An Imaginary Film” is two hours of claustrophobic cinematic bliss compiled for Painters, Writers, Photographers, Designers, Cruisers, Night Walkers, & Dreamers. Adrenaline drips thick like syrup across a horizon where memories become blurred scenes behind the windshield & yesterday’s faces fade as the road strobes to aggressive rhythms. Romantic melodies linger in the rearview mirror as chimera bells saturate the electric fog that’s slowly rolling in. Over the span of thirty-seven tracks, Symmetry embraces the elegance of European noir, cut with a lean & violent American razor. Directly in your face & breathing down your neck one minute, & escaping beyond the night sky the next. The attention given to color & detail on these recordings is more graphic than musical. More visual than aural. With no flashy virtuosity to clutter the mood, the album’s pulse thrives on the empty pockets of space left in the wake of throbbing bass & the faint flicker of electro candlelight. Minimal, strict, & always in motion, there’s an oppressive overtone throughout the record that winds itself tight as a clock. Johnny Jewel & Nat Walker (Chromatics & Desire) give us propulsive moments that are more rhythm based than Pop, & less reliant on a lyrical presence than their other projects. We hear elements through the veil & color of analog synthesizers & rhythm machines from the early 1970s, resulting in the suspenseful & patient territory pioneered by the hands of John Carpenter, Claudio Simonetti, Wendy Carlos, Klaus Schulze, & Krzysztof Komeda. Symmetry is not Pop. Stripped to its most primitive & visceral core, this is music written for picture. Your life is the film & this is the soundtrack. 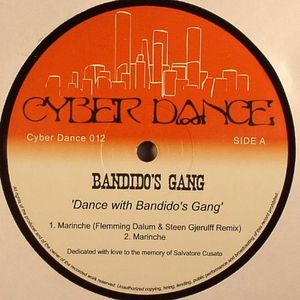 Ostensibly one of Italo Disco’s great lost producers, we suspect that Bandido’s Gang may well be a nom de plume for one of the label’s many associates. Whatever their provenance, the tracks certainly sound like vintage Italo, with ”Marinche” leading with a pulsating bass arpeggio and synth horn melody worthy of Moroder, whilst the Flemming Dalum & Steen Gjerulff remix adds layers of vocoder and a variety of cosmic accents to its sturdy frame. ”Last Train to Tucamari” meanwhile takes a more languid approach, pulling in an opposite direction to the speeding train samples, whilst Flemming Dalum & Mike Salta’s remix adds some guitar licks, hazy synth atmospherics and even a flute solo which just adds to the classic Italo feel.