New Trackman Lafonte & Bon Qui Qui aka Legowelt & Xosar. Raw analogue house music. When computer programmer and music enthusiast Lowrell “Trackman” LaFonte was relocated to a small suburb North of Santa Barbra California a chance encounter brought him to meet Bonquiqui Pardue. As he scoured his local break to find someone with a resin patch kit to fix a fresh ding in his favorite tri-fin fishtail, Bonquiqui, dental hygienist, and also an avid surfer just so happened to have a kit handy and a union was born. From this moment on Lafonte & Bonquiqui were inseparable, often hitting the clubs and immersing themselves in Latin Freestyle and obscure local house productions from the smog filled Valley. As it would have it, eventually the two moved in together and began working on their own music, using strictly Casio drum machines and keyboards. Inadvertently, Lafonte & Bonquiqui pioneered a sound now known by the masses as “Surfer House.” These three tracks stand as a testament to a time in California music history that can never be recreated, no matter how hard the posuers at the local break try.

Andreas Ghem returns once again to the Mathematics imprint for more banging house cuts. “Fire & Ice” along with “From Space 3 SunsS” bring old school Chicago house vibes with raw drums and eerie synths. “Warm Words Don’t Help As Much As A Helping Hand” with the title track take on the flip. 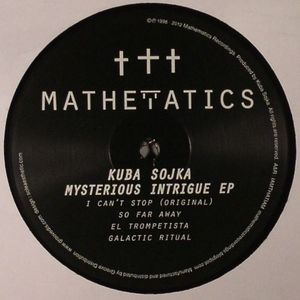 From the full length double CD Mysterious Intrigue by Kuba Sojka on Mathematics Recordings, comes 4 tracks previously unreleased on wax. The original version of “I Can’t Stop” and “So Far Away” take on the A-side while “El Trompetista” and “Galactic Ritual” fill the flip. All cuts show the producer’s top notch skill and balance between house and techno.