Vital Force is proud to present the new album from the legendary producer Orlando Voorn. A hip hop fan since the 80’s, Orlando used his unique scratching skills to win the Dutch DMC DJ championship in 1986. It was clear he always had a true love for all things Hip-Hop. Orlando has also traveled the globe as a Techno DJ during which time he regularly hooked up with many talented MC’s. Voorn began to compile the music created in these sessions which started way back in 2000. The various collaborations resulted in the album La Cliqa. The album represents the best in fluid, clever lyricism and a production style which sounds fresh and contemporary while giving an unashamed nod to the hip-hop golden age of the early noughties. In his career which began almost three decades ago, Voorn has used many different aliases and produced an abundant amount of styles of music but it’s his Detroit Techno/House productions that have gained him the admiration of the electronic music scene. With the release of ‘La Cliqa’ Orlando hopes to introduce his sound to a whole new audience.

In the early 21st century, a shadowy figure rose from the dust that settled atop forgotten record collections throughout Africa, leaving behind a trail of clues in what seemed like a wild good chase, but in October 2013, Luaka Bop will unmask a phantom: the great William Onyeabor. 13 tracks from Nigerian electro-funk originator, a mystery man of epic proportions, and an elusive master of synth & good vibes.

Eno Louis gained a solid background in traditional Edo music as a student at Edo College in Benin City. He lived at Fela’s Kalakuta Republic till the army raid in 1978, when he moved to the US for a couple of years. On his return, he recorded with Edo funk powerhouse The Talents Of Benin, and quickly became a mainstay of the flourishing disco and boogie scene, in-demand as guitarist and drummer, with credits including releases by Pogo Ltd, Amas Grill, Chris Okotie, Oby Onyioha, Chris Mba, Dizzy K Falola, Harry Mosco, Pat Finn and the Super Elcados… to name just a few. The two tracks here are from Louis’ debut LP, Living In The USA.

Moon B \ Off \ ATL B – Cassette Funk EP [MOONBCASSETTE] 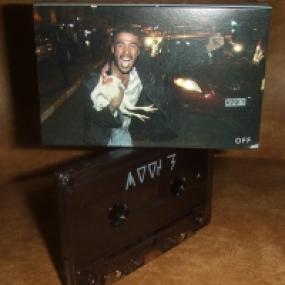 Definite deck only release / packaged in single style J-Card. Twenty minutes of Moon B, which is unreal really! Limited cassette!