END_OF_DOCUMENT_TOKEN_TO_BE_REPLACED

Second solo album from accomplished Berlin based producer Tobias Freund. Continuing his exploration into ‘non-standard’ electronic music, and expanding on the rich sound palette charted in his first LP, ‘Leaning Over Backwards’, this new chapter presents 10 versatile tracks taking us ever further into the purist, evolving sonic world of Tobias. ‘A Series of Shocks is Tobias’ is an impressive return to longtime home Ostgut Ton. Beginning with the beatless melodic pulse of the Steve Reich-influenced “Entire”, Freund works his way through a range of clandestine techno compositions, touching on claustrophobic acid and intense late night thump (“Testcard”, “Ya Po”), scratchy Chicago jack (“Instant”), deeper moods (“The Scheme of Things”) and, most thrillingly, early ’90s influenced intelligent techno. It’s in these moments – “If” and tactile ambient breaks of “Cursor Item Only” – that A Series of Shocks really flies.

Just a year after starting and the irrepressible R-Zone series is up to release number 9. Again this time there is no real word on who is behind the music, but again it is fierce, searing techno for darkened dancefloors. The barrelling, stomping ‘Down You Go’ opens this EP with blocky metal beats, spares synth lines which bleed in and out of focus and plenty of rattling percussion. ‘Give Me More’ goes a little slower and deeper, with rubbery kick drums forming the base of the track as molten and melted acid gurgles percolate up through the mix. On the flipside, ‘Too Much TV’ is a more elastic groove that undulates up and down with short little acid stabs buried deep within as the bass drops in and out. Supple and propulsive, it’s arresting stuff that gets completed with final track ‘VHC Beats’. Whichever producers are behind the R-Zone series always manages to come up with the goods, so if you like fizzing, textured techno that pulls no punches, this remains the series for you. 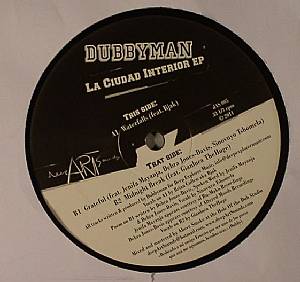 La Ciudad Interior EP was produced by deep Explorer artist Dubbyman. He’s mixing electronic music with jazzy chords and some space spherical grooves, giving us a brilliant mixture of different styles and vocals. It took almost one year to complete this three track EP. Dubbyman has been drawing a lot on musician friends for adding a human touch. He has been blessed with amazing vocals by Bjak, Jenifa Mayanja, Gianluca TheHuge, Sinovuyo Tshomela and Debra Jones-Davis.

Decius – Come to me villa. ”If you can’t smell ladyboy sweat while listening to this track then I’m sorry, you have forgotten how to ‘feel”. Decius – Gay Futures. ”Dirty, raw, drug – fuelled house music, for men and women”.