After more than a decade of releasing raw and emotional house music, Dutch producer and architect Aroy Dee is about to drop his debut album on his own M>O>S label. The man has established himself as someone who creates misty analogue music that nods to a Chicago heyday at the same time as coming imbued with plenty of its own deep emotions, mystic melodies and jacking beats. His M>O>S label has become a go-to outlet for fans of no nonsense house and that tradition continues on this full-length album. Incidentally, M>O>S stands for Muziek Over Steden – Dutch for ‘music about cities’ – because Dee has a close tie to buildings: during the day he works as an architect so has an unrivalled grasp of space, structure and urban environments that surely translates into his well built house music, and more specifically into this debut album. Made with the same hardware that defines the rest of his discography, including his first synth, the Poly 800, which he bought from his friend NWAQ, Sketches is a truly idiosyncratic project.

“For me, my musical output and development feels like an on going history of my life. In this perspective I worked steadily over the last two years on my first full-length album, Sketches. It’s a very personal document, not intended to make anybody happy but myself, which is why it has taken so long. It’s like a diary or ghost-script written about a part of my life and my fascinations, honoring my biggest musical inspirations.”

From the shores of the Great Lakes comes a 3 track floor filler from MI duo 2AM/FM aka JTC & D’Marc Cantu. Confronting the canons of Techno & House head on, this 12″ takes you beyond the dance. Best experienced loud though, preferably in a darkened smoke filled room. 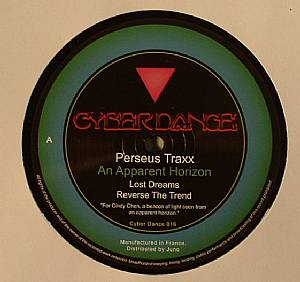 Cyber Dance Records are back on the attack with a fresh release from Perseus Traxx aka Nigel Rogers, a 4-track EP entitled after recent scientific developments ‘An Apparent Horizon’. It’s a firmly machine-based and totally jam-packed affair reflecting diverse sounds from the UK’s own rich history of electronic dance music, with elements from the classic Warp “deep space sound” prominent as much as the more usual 303-jacking acid house grooves in the vein of Baby Ford or Bam Bam. ‘Lost Dreams’ opens the record with a floaty dream-like hipnosis from the depths of space and sets the tone in magnificent style, followed up on Side A with the irresistible roll of ‘Reverse The Trend’ that takes the groove harder, further and deeperstraight off to the beyond. Dark strings reminiscent of old LFO, B-12 or Autechre vinyls from the early 90s propel us into Side B on ‘Darkness Stalks’, and then we’re transported onto the concluding track on the EP, ‘Distances’; an epic closer that opens with beautiful reverbed claps and acid squelches before diving into an inky black void of timeless space-travelling and slow-building tension that could surely echo hauntingly around any M25 rave in the depths of a late 1980s night.

The French duet Acid Square Dance aka Nicolas Villebrun (Society Of Silence) and Hervé Carvalho (Acid Arab). Recorded during Jam sessions in Paris, here are 3 new killer Acid tracks, 2 raw and intense floor burner on the A side, and a kind of Deep Balearic ballade on the b side.