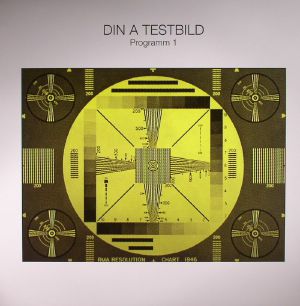 Early pioneers of the German New Wave music scene, Din A Testbild were formed in 1978 by Mark Eins and Gudrun Gut (former member of Einstürzende Neubauten, Mania D. and Malaria!). Din A Testbild played a significant role in defining the avant-garde music of Berlin. Legendary is their partecipation at the “Festival Genialer Dilletanten” in 1981. “Programm 1” and ‘Programm 2’ were mixed and produced by Klaus Schulze on his own record label Innovative Communication in 1980. This first vinyl repress celebrates the 35th anniversary of this classic electronic album. 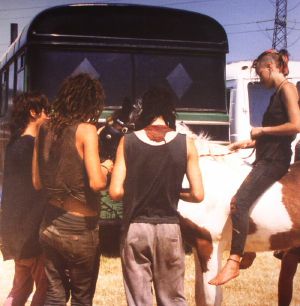 This record can easily be classified as Library. Listening to these tracks moves your senses back and forth through time, from 80’s sci-fi back to Raymond Scott’s early 50’s experiments. The perfect soundtrack for bedrooms, late night dinners and greenhouses Ed Dmx contributes to a tradition in musical history, a richly vivid trail in which composers influence each other’s harmonies and ways of writing tunes, like an endless ping-pong game between minds and individuals but at the same time between continents and places throughout the world. Unlike many of Ed Dmx’ electro- oriented productions, ‘TheNew Age Travellers’ shows a more intimate side of his work. A story told through short synthesized conversations and electric piano improvisations is reminding us to cry, dream, remember, feel, live … and love.

Space Art was the French electronic duo of Dominique Perrier (keyboards, vocoder) and Roger Rizzitelli (drums, percussion). Between 1977 and 1981, they released three albums of comsic synth pop, in which they laid much groundwork for French electronic music to follow. Space Art’s third single “Nous Savons Tout” was released in 1978 on IF Records. Their sound was similar to Jarre’s early analog albums, but with the addition of real drums. Dominique plays an ARP Odyssey, Clavinet, Eminent, and Minimoog, maximizing their warm textures. Roger plays the drums in an intricate fashion, influenced subtly by jazz fusion. “Nous Savons Tout” features an early prototype of the Vocoder, which the band used to create the chorus. On the flip is the slower ”Melodie Moderne”, an electronic take on classical rock songs of the 1970s. Both tracks were recorded at Studio Ferber Paris in June 1978. Like Richard Pinhas/Heldon and Yellow Magic Orchestra, Space Art created their own brand of dark space disco, paving the way for bands like Air and Mellow.

“On KESS02 we go straight to the core of the Kess Kill sound and aesthetic with this contemporary of Liaisons Dangereuses and D.A.F. Xao produced some extremely singular music in the late 1970s and early 1980s, which makes for a very proud first reissue for Kess Kill. This is music so unparalleled that making comparisons is completely redundant. Think jacked up post-punk with manic rhythmic tendencies and you’re halfway there.”