Veteran Lyonnais producer, Umwelt, has a new album to launch the LP focused sub-label of Killekill – Boidae. “Days Of Dissent” is a polished 8-tracker loaded with bold electro stabs, acid riffs, epic, subtle melodies, drama and funk. “It is emotional, it tells a story, it is easily recognizable and it is not interchangeable”. The talented producer is one of a kind as he produces without computers in a single take, without any edits or mixing and cut to dubplates directly in his home which he uses to play out during his sets, conjuring up a insanely vast backlog of productions. Umwelt predominantly releases on his own imprints, however recently made appearances on legendary electro label Shipwrec and Helena Hauff’s Return to Disorder imprint. 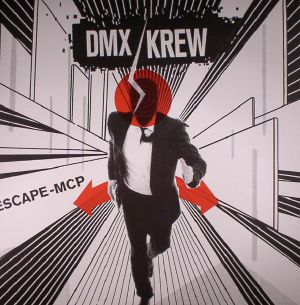 UK wave funk veteran DMX Krew returns to Abstract Forms with his latest double album project. Escape-MCP features 13 tracks of synth drenched electro and elastic techno grooves drawing inspiration from a 1983 computer game where the player is trapped inside a computer by a rogue processor. Fortunately DMX Krew isn’t trapped inside a computer and is still with us making killer grooves.

Alpha 606 is Hialeah born, Miami dwelling Armando Martinez, who offers an intoxicating concoction in the form of his unique take on electro. Taking the genre’s classic sci-fi synthetic aesthetics and coding them with his own Cuban musical heritage, there’s a real funk and spirit in Armando’s machines. The carnivalian drum frenzy of “Afriba”, the tipped humanized elements of “Shake”, the hypnotic house headnods of “Black Mermaid” the roomy reverberations and lean make-up of “Whale Memory” and plenty more comprise a unique melting pot that references all points past and future.

Dynarec is one of those who is capable to impress each and every time that he delivers a release. Dynarec improves on even the most advanced experimental electro as no one did before, giving it depth, awareness and knowledge, making it more rigid and linear. A journey into those post Drexciya atmospheres which reach some of the highest moments in a new. Romantic and complex, rich in detail and unlikely to be imitated or surpassed by others on the contemporary new electro scene. Drexciyan kind of Electro with The Exaltics and Voiski on remix duty.

Vakula – A Morning Without Glory [BANDURA005]

mgch comes through with a dexterous debut 12” for listen2me. This 4-track EP explores lush pulses and shadowy rhythms, balancing both introspection and evocation. Label mate and long time collaborator Serb flips the title track on its head, delivering an ever evolving and explosive remix.