From Chicago Noleian Reusse (Africans With Mainframes) serves 3 tracks of alien jacking weirdness. The package is completed with a remix by labelboss Paul du Lac aka Paul West.

The return of Rome based ACEW label with 2 tracks involved in minimalist, electro with an IDM touch. Vocals from Carl Finlow.

One of the founding fathers of Chicago house, himself a grandson to a DJ and frequently alongside other greats such as Ron Hardy on the decks, Gene Hunt summons a 3-tracker for the Midnight Shift label. True house and techno direct from the source and in his own words, a rather ‘jungly’ take of it due to the tracks’ chaotic percussion. 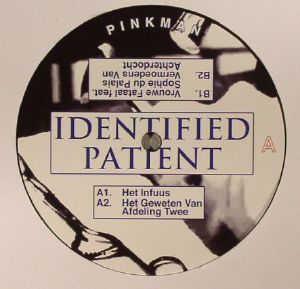 Identified Patient debuts on Pinkman with a brimming 12” with claustrophobia and paranoia. Acrid acid lines have been boiled down and smeared across cranking percussion. Sired in a soup of static, a blackened groove stalks the entire EP. Dusty beats are rinsed in smelting liquor, a smouldering EBM undercurrent surfacing as the noose tightens to a close.

Alessandro Adriani weaves a nightmarish scenario as the Mannequin man returns to Pinkman’s Broken Dreams with four hardened works. Beats are shaven into rigid points as EBM echoes are speared with contemporary contempt. Throughout the quartet are moments of exotic abstraction, psychological stresses and visceral disorders. Music for sleepless nights and addled minds.

Posted by hipodrome on May 29, 2017
Posted in: 001.Features. Tagged: 96 and forever records, album, baltra, deep house, margaux lonnberg, of paradise. Leave a comment

Of Paradise welcome Baltra into the inner circle for number three; a 2XLP reissue of his “No Regrets” album. Originally released in February 2016 as a limited edition cassette on the artists own 96 And Forever label, this is the first time any of these tracks have been made available on vinyl. “No Regrets” captures the deep, raw emotion of the big city, taking the preconceived ideas of underground electronic music and lovingly twisting them into something new.