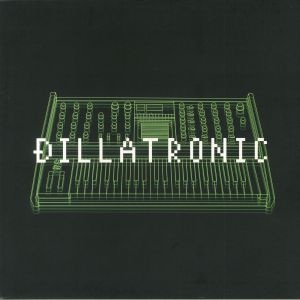 The previous 3 volume series is now compiled as a compact 2LP. The late, great J Dilla is rightly celebrated as one of the greatest hip-hop producers of all time, in part because his ear for music was so diverse and expansive. As Dilla’s mother Ma Dukes explains, “He didn’t come with a limited capacity, and real producers produce, produce, and produce. “There are no formats for genius workers…just non-stop creations.” Now, a fresh batch of those creations will be made available to the world for the first time, in the form of the latest official J Dilla release, Dillatronic. Presented by Ma Dukes and compiled by DJs Alien Villainz (fellow Detroit natives who worked closely with Dilla), Dillatronic contains over 40 rare instrumentals that showcase Dilla’s undeniable electronic influences. J Dilla’s music was impacted by the diverse musical history of Detroit – the birthplace of Techno and one of the most important cities in the history of electronic music. “You can hear it in songs like ‘Raise It Up’ for Slum Village or ‘Make It Hurt’ for Busta Rhymes,” says Young RJ (Dilla’s protégé and member of Slum Village). “The Detroit influence is part of what gave him an edge in production.” With today’s music sounding more electronic than ever, Dillatronic has a shockingly contemporary feel. “These tracks are still ahead of their time sonically,” explains RJ. “The things producers are doing now, Dilla did that 15 years ago.”

A record that definitely lives up to its title – an obscure Italian sound library session that blends instrumental touches that evoke an America at the start of the 70s with some of the hipper, deeper currents you’d expect from the team of Stefano Torossi and Giovanni Tomasso. There’s plenty of expected sound library funk in the mix here in a way that makes for one of the most unique sound library sessions we’ve ever heard.