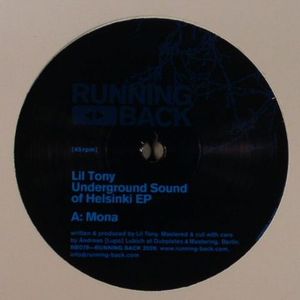 Finland’s hardest working DJ Lil Tony is no stranger to people who spent the last 15 years with house music. Part of Nu-Spirit Helsinki, the powerful Future Beat Investigators and the driving force of the city’s pulsating club scene, this man did it right from start to finish (no pun intended). Recently, Tony started to flex his muscles as a solo artist as well with recordings for Innervisions, Versatile or Mood Music and most of all the inspired jacking re-work of Arthur Russell’s Treehouse that the RB office is still jealous of. Blindfolded we would have declared on oath to listen to a missing Ron Hardy rework. But to move on to pastures new, The Underground Sound of Helsinki EP is also a kind of a lost gem with its roots house approach. Three big tracks from Lil Tony: Mona evokes gentle feelings of rough classics from the vaults of Steve Poindexter, Armando and Mike Dunn or all the other cats living in oblivion – ruff, rugged and raw. Saturday Morning is a perfect mood builder and does what straight house music does best, while Employee Only spreads as much optimism and hope as it multiplies those feelings of melancholy just house can evoke to make sad people happy. Subterranean vault music with a fine ear for the action.