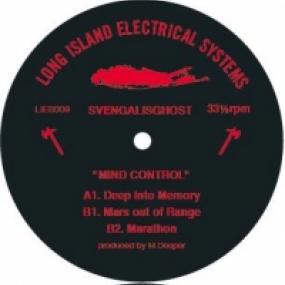 Another new artist making their vinyl debut on L.I.E.S. After being brought to the attention of the L.I.E.S. camp almost five years ago by New York legend PorkChop (SSPS/Nation/Excepter) the goal was to release something by the mythical figure known back then as, Below Underground. As time passed from 2007 to the present PorkChop had continued to pass along the music of his friend from Chicago every time we dj’ed together. As L.I.E.S. took shape I had made contact with the artist and discussed the prospect of getting a hold of his archive of songs and releasing some of them, only to find out most of his early recordings had been lost (thankfully, due to PorkChop we recovered them). Now transformed and known as Svengalisghost, we present three undeniably original compositions from these sessions which sit in the grey area where early house music and primitive industrial electronics met and existed on the same plain.