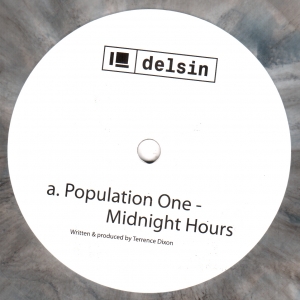 Terrence Dixon is the man behind sporadic production alias Population One, serving up dark and heavy, intense and ravey records. Delsin’s re-issue arm has sought to get some of the old tracks out there once again on this double a side 10″ outing with ‘Midnight Hours’ and ‘Two Sides To Every Story’. ‘Midnight Hours’ bangs hard and fast with an unhinged melody line squirming about like an untethered hose. Every surface is frayed and rusted, frosty and splintered making this some of the most primeval warehouse techno you will likely have heard for a while. ‘Two Sides To Every Story’ is just as tough and unruly, with myriad synthesized sounds rushing about in side a framework of incessant hi hats and solid kicks like a bee trapped in a bottle. A controlled frenzy, you might say, but certainly the sort of abrasive and arresting techno that works perfectly in the darkest of basements.

Population One – Midnight Hours / Two Sides To Every Story [X-DSR003]