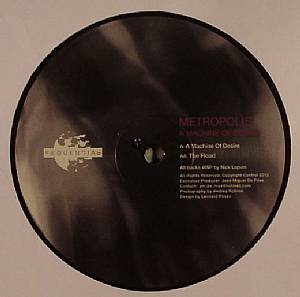 Nick Lapien’s debut release as Metropolis garnered little attention when it materialized last year. A skeptical yet dedicated network of underground heads built up a subterranean buzz that has yet to spread into the daylight. That initial transmission was thick with the raw analogue flavors that have become ever-present in dance floor fare recentlybut his is a sound that is dedicated to the emotive, narrative aspects of electronic music rather than simple fetishization or passing curiosity in the days of yore. This, his second release as Metropolis, shows a more focused and patient hand at work. The titular track on the A side is a deep, psychedelic groover. Melodies, textures and sequences undulate and intertwine within a lightless atmosphere guided by Lapien with optimum restraint. Equally pensive and gorgeous, The Flood serves as a Machine’s beat-less foil on the reverse. Made up of little more than feedback and two slow, echo laden arpeggiated sequences, this is reminiscent of Jean Michel Jarre’s more sinister moments: a brilliant paradox of economy and indulgence.

Metropolis – A Machine Of Desire [SEQ007]