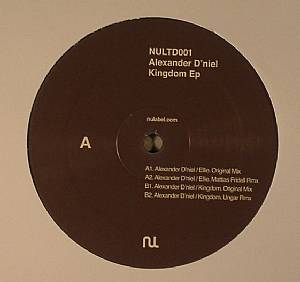 Argentinian Alexander D’niel delivers the debut release for Nulabel LTD. He starts with “Ellie”, a world of drums, cymbals and synthesizers in a restless and powerful techno´s key. Meanwhile, the Swedish Mattias Fridell´s remix shows us a smart and elegant construction of technoid rhythms performed in a depth and accurate way. “Kingdom” is the second original track of Alexander D’niel, and where he shows his most aggressive side with a wrenching techno as a continuous sound storm. Ungar´s remix respects the original track´s style but it breaks its rhythm giving more depth and versatility to a techno packed of groove.”