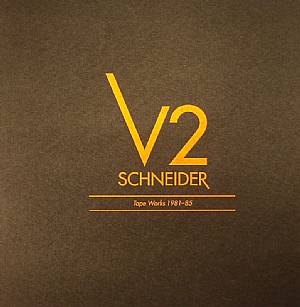 The finest German Minimal / Synth from early 80’s NDW Underground by V2 Schneider. For this release Jurgen Schweighart, alias V2 Schneider, sat down, saved and listened to approximately 50 original master tapes, reels and cassettes from 1980 to 1985 including his official tape releases ”Vol. 1” (1981), ”Blues” (1982), ”Abgrund der Gefuhle” (1984), ”Nr.1 in Hong Kong” (1985), ”After A.I.D.S. Symphony” (1985) and many so far unreleased hidden treasures, demos and out-takes. At the request of VOD-Records, none of the tracks were remixed or edited and therefore kept in their authentic original and charming form.