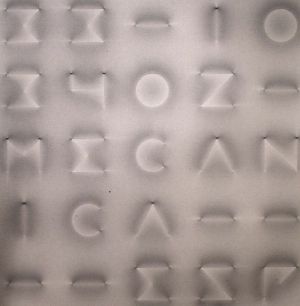 33-10-3402, also known as Serbian-born artist/producer Nenad Markovic, returns to the ESP Institute for the fourth and final release in his opium den and whorehouse inspired Mecanica series. ‘Slow Port’ is a cacophonous track, skillfully composed of an erratic barrage of percussive klinks and klanks as you might find in an automotive factory—pistons, gears, quips, cranks, but despite its industrial instrumentation, Nenad manages to extract a beautifully seductive quality from this beast. On Side B we’re faced with the slightly more musical ‘Plutonium Certainly’, an exercise in distortion which is punctuated by repetitive androgynous chanting, and finally we culminate and release simultaneously with ‘Elika’, an overtly ethereal blur somewhere between hope and melancholy.