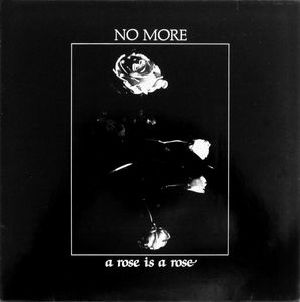 No More are a band from Kiel, Germany, founded in the summer of 1979. Their music is rooted in early Post Punk / No Wave. No More began as a quartet with Andy A. Schwarz (vocals, guitar, bass), Tina Sanudakura (synthesizers), Christian Darc (drums, vocals) and Thomas Welz (bass, vocals). In 1982 No More released the mini­-album “A Rose Is A Rose’ on 10′. Songs on this mini­-LP convey the desolate and bleak attitude of German youth in the early 1980s. This reissue compiles all 8 tracks from the mini­-LP, both tracks from the Suicide Commando’ 7′ plus 3 demos from 1982.