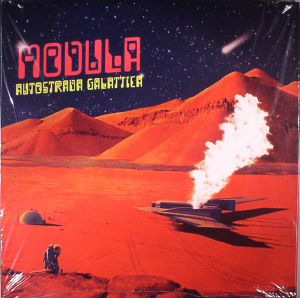 2183. After crash landing on an alien planet, intrepid explorer Modula valiantly crawls from the wreckage of his interplanetary cruiser clinging to his life (and antique synthesizers.) Taken captive, this neo-Naples born space traveller is soon drafted into the services of the court of this other world’s ruler. His music boxes save his life and change the very face of this distant kingdom. The results have just been beamed back in time to earth and intercepted by the Bordello receiver dish. Modula’s voice crackles through and utters two words: Autostrada Galattica . Cosmic boogie, futuristic funk and deep space disco are human terms to describe these sounds sent half way across the universe to be enjoyed by we humans of the 21st century. Love, sacrifice and musical riches from a synthesizer super nova.