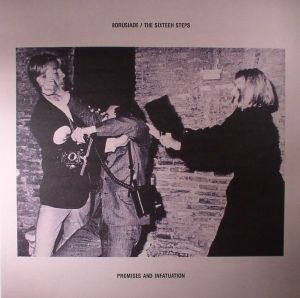 Cititrax present a split EP by two massive talents, Borusiade and The Sixteen Steps. Borusiade, originally from Bucharest, Romania began as a DJ in the early 2000s and then started producing music in 2005. With a background in classical music, she combined her love of raw electronics, obscure themes and melodic lines to create her own signature sound. She has released on the Cómeme label as well as Corresepondent. Infatuation and Confutation are dark, moody and intense tracks that catch you upon first listen. The flip side of the Promises and Infatuation EP features The Sixteen Steps, the brainchild of George Lanham who cut his musical teeth DJing and running events in the south of England. We have been listening to many of his tracks endlessly for a while now. Signals From The South and Promises On The Run are both immaculately produced, hypnotic, dance floor killers. They are sparse ebm meets smoky warehouse techno, and offer a wonderful contrast to Borusiade’s layered emotive tracks that reminisce of an East Village club in the 1980s. Themes of infatuation, appearances, and anonymity appear throughout this EP from the music itself right through to the cover art.