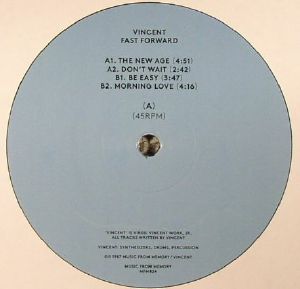 Music From Memory return, this time with four tracks drawn from Virgil ‘Vincent’ Work Jnr’s little-known cassette only debut from 1987. This album reflects a more stripped back and raw musical approach from the St. Louis musician. The ‘Fast Forward’ sessions grew out of a series of late night jams with Vincent’s brother Scott who was then living in Kansas. With nothing planned in advance and no written music involved in the final recording sessions, the songs that would form ‘Fast Forward’ very much evolved out of improvisation. As Virgil himself explains, the title of the album in fact came about because it felt “as if I had fast forwarded to a different sound”. Although the album received a good response from local radio DJs and music magazines, the album sadly never gained enough momentum or demand for a further run of copies. Fast forward to 2017, exactly thirty years are their production, and Music From Memory are delighted to be able to finally make Vincent’s music commercially available again.