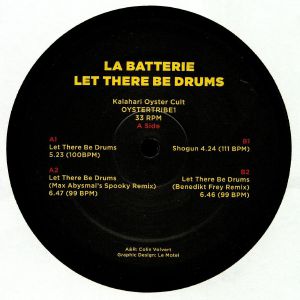 First opus of the new series is La Batterie, by the UK’s Richard Podolor and Sandy Nelson in 1983 in the hypnotic shimmering disco of ‘Let There Be Drums.’ The music of Polodor and Nelson is being given new life by Kalahari Oyster Cult. Alongside the entrancing original are two remixes. First up is Australia via Amsterdam’s very own Max Abysmal with his ‘Spooky Remix.’ Adopting and adapting the raw energy of the ’83 version, Abysmal layers ghostly notes and spectral snares into his mechanical remake. The flip takes on a different slant with ‘Shotgun’ taken from the EP of twenty fives years ago. A super slick work of understated funk shot through with bold keys and powerful chants to show another side of the UK pair. The fiercely talented Benedikt Frey closes, turning his daringly able hand to ‘Let There Be Drums.’ He keeps the vocal line, the rest of his rework is dipped in a thick heart of darkness threat. Pulsing thumps, menacing notes and danger lurk in this jungle of Frey’s own making.