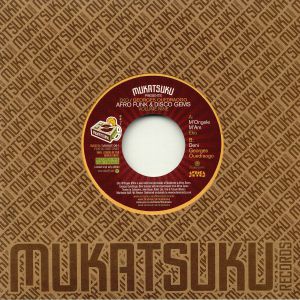 Volume 9 of Mukatsuku Afro series kicks off with ‘M’Ongele M’Am’ from Cameroon artist Eko Roosevelt Louis taken from his early 1980’s self-titled album and licenced for this 45 from Nubiphone & Africa Seven. Driving brass funk fuelled afro disco does not really get much better than this. On the flipside Georges Ouedraogo from Burkina Faso gives us us the dance floor bomb ”Deni” taken from his 1978 long player ”Gnanfou Gnanfou” also licenced from Africa Seven and also the first time ever on a single. Punchy brass offset by those hipnotic vocals and funky wah-wah guitar has a deserved place on the flip.