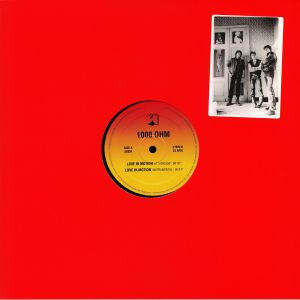 Attic Salt Discs presents the official re-issue of the Belgian synth-pop evergreen ‘Love In Motion’ (1984) by 1000 Ohm. The band kicked-off in 1979 with their successful debut A.G.N.E.S. / Look Around and later on developed their style from New Wave to Italo-Disco influenced Synth-Pop (‘The Claim’) and a decade later even touches of New Beat (‘You’re The One’). ‘Love In Motion’ is a beautiful mixture of 1000 Ohm’s repertoire. The release comes with remastered versions of the original 12″ version, instrumental and on top a DJ friendly ‘Vanzetti & Sacco’ edit.