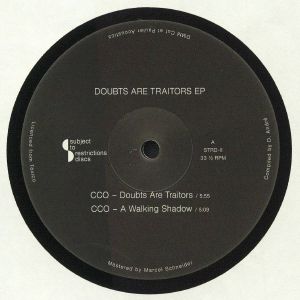 For its second installment Subject To Restrictions Discs presents a split EP by two of Switzerland’s most underrated producers. First there is CCO. A modular wizard known from his involvement in groups such as Wavetest and Savage Grounds. He presents two Techno cuts that are bound in organic sounds and filled with driving energy. The three mellow cosmic wave tracks on the back are coming from Narco Marco. He’s active in Bern’s music and nightlife scene for almost 30 years. His music knowledge is legendary and shows itselfs in his productions which are filled with sparkling details.