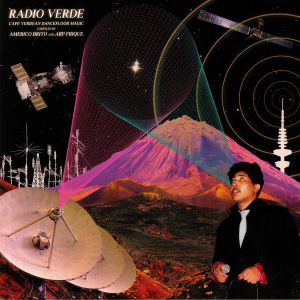 Arp Frique returns with a brand new release on his imprint Colorful World Records in collaboration with Rush Hour. A compilation of 12 Cape Verdean gems assembled with the help and knowledge of Americo Brito, there is a very special story behind it. Americo Brito, who features on Arp Frique’s original Nos Magia, is a proud and important member of the Cape Verdean community in Rotterdam. His story reveals the historical connections between radio, vinyl, Cabo Verde and Rotterdam’s international music scene in the 70s and 80s. Cape Verdeans have migrated all over the world, mainly to cities with big harbours, like New York, Boston and Rotterdam (Holland). Rotterdam became one of the main destinations (next to Portugal) on the European mainland. When Americo, like many of his friends and relatives moved to Rotterdam, he quickly became infected with the music virus. Surrounded on a daily basis by Cape Verdean music in Portuguese pensions and small hotels, this was where sailors ingested a dose of “sodade” through the interpretations of their beloved music by the local Cape Verdean artists. Americo took to the stage with his band Djarama in the 70s and 80s. Here he works with Rotterdam local Arp Frique to serve up Cape Verdean music old and new with plenty of traditional Funana and Coladeira sounds next to jams influenced by wave, disco and funk, jazz, reggae and Latin pop.