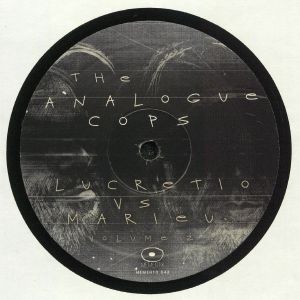 Lucretio and Marieu a.k.a. The Analogue Cops come back on Memento with a four tracks EP. Lucretio delivers two cuts written and produced with the extraordinary Kyma workstation: “Ghetto Stab” is an heavy DanceMania influenced party banger while “Any Idea” is a deep techno journey into the realms of spectral manipulation. Marieu brings in all the hardware horsepower romanticism with “Tab and Rub” and “The Restored Text”; the first being acid excursion into the memories of the earl From days, the second interpolating massive kick drums and saturated harmonics with frantic vocal samples.