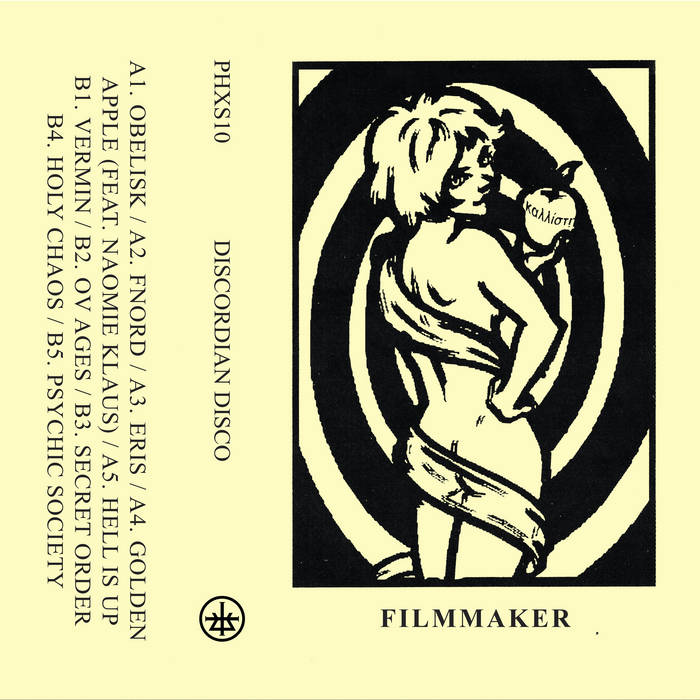 Filmmaker sharing some mythical and magical sounds on the latest Phormix release. Dystopian panoramas have been a recurrent panorama on Filmmaker’s tracks and for this work the direction focused on some core elements like the entropy and chaos magic to bring a musical tribute to the goddess Eris. Filmmaker’s birth name, Fauns (derived from Faunus) has surrounded his life with inspiration from greco-roman mythology so all the energy put on ‘Discordian Disco’ is fed by the multicontextual universe and synchronicities that shaped it into a memorable tape. During the days off his touring in New Zealand, Faunes stayed in Wellington, city where these 10 tracks were recorded using his Deluge, motivated by how the other artists on this tour developed various uses and styles for this instrument also crafted in that land. The result is a collection of wave grooves and lo-fi creamed melodies which also included a special collaboration with the Belgian producer Naomie Klaus (ex Laura Palmer) on the track ‘Golden Apple’ where she delivered both male and female vocals with lynchian tones and tribal vibes. Besides the symbolism of this release, Filmmaker wants to dedicate this album to his most eclectic listeners for highlighting the soul reflected on the music since the beginning. Discordian Disco aims to cause a unique remembrance on the auditory memory of anyone who listens to it from start to finish as is the last Filmmaker’s full-length on this 2020.