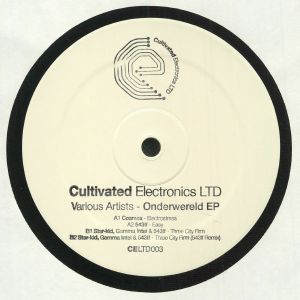 Coming next on Cultivated Electronics Ltd (CE’s limited vinyl offshoot) is a V/A EP entitled ‘Onderwereld’ which takes its name from a former atomic bunker based in The Hague (Netherlands) that housed music studios, offices and the Intergalactic FM station, Onderwereld Radio. The building had to be vacated last year, but the amalgamation of some of those artists and their creative resources lives on. Together, they encapsulate the new underground sound of The Hague. Opening the A-side is a track by Crave Festival organiser, Cosmox who delivers tough staccato Electro-funk on ‘Electrostress’, before 543ff (a regular player on the Dutch Electro scene who’s released on ?X and has a forthcoming album on Diffuse Reality) brings stripped-back beats and layers of melody on ‘Easy’. Keeping the Onderwereld collaborative ethos alive, 543ff joins forces with Star-kid (Bunker Records) and Gamma Intel (Brokntoys / Pinkman) on the B-side, for ‘Three City Firm’. Their original version is dark and bristling, while 543ff’s remix takes the track on a galactic ride.