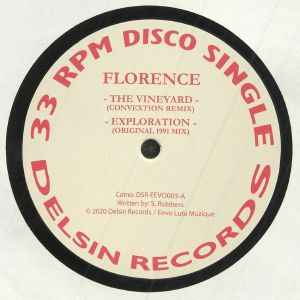 Delsin presents two supplement EPs to the recently released retrospective compilations of Wladimir M. and Florence. This first Florence disc its a collection of rarities. The EP opens with Convextion’s remix of ‘The Vineyard’, never been released on vinyl before. Second track on side A is the original mix of ‘Exploration’ as featured on the very first Eevo Lute EP in 1991. Side B opens with Peter Ford aka Baby Ford’s remix of ‘The Vineyard’, originally released in 1996. The EP closes with the original instrumental version of ‘Disappointment’, to which the lyrics and vocals by Wladimir M. were added later on.