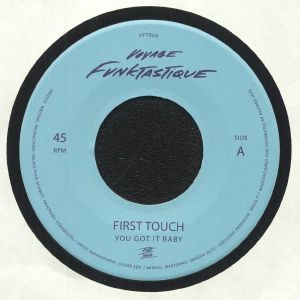 The German duo, First Touch,  are back with a new 7′ release. The A Side features the banger ”You Got It Baby”, a revamped & boosted interpretation of the original version, previously released only on CD in 2009, and available for the 1st time on vinyl. This song really established the ”Modern Funk” sound, and solidified First Touch as pioneers of the movement. The B Side ”Crampjuice” oscillates between Funk & Electro vibes, with thumping drums and the classic First Touch aesthetics; refined and sophisticated grooves.