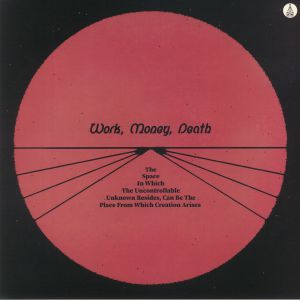 A transcendental journey that takes in meditative musical mantras, sprawling tenor sax improvisation and mesmeric percussion, the new album by Work Money Death, titled ”The Space In Which The Uncontrollable Unknown Resides Can Be The Place From Which Creation Arises”. Originally conceived as a large scale group performance of a single extended piece the album was written by Tony Burkill and bassist Neil Innes through a series of extended improvisations similar to the extended meditation sessions that both musicians practice. These sessions enabled a state of flow through which Tony’s compositional approach to improvisation yielded meaningful melodic fragments that would be returned to and developed in a way similar to someone returning to the mantra. Also featuring on the record are drummer Sam Hobbs, pianist Adam Fairhall percussionist Pete Williams.

Work Money Death – The Space in Which the Uncontrollable Unknown Resides, Can Be the Place from Which Creation Arises [ATALP022]