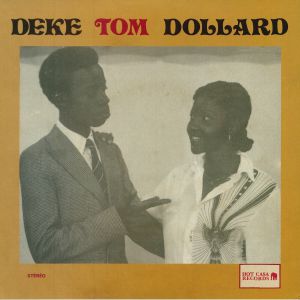 Afro-Soul music from Ivory Coast served up by Deke Tom Dollard, an obscure artist who only recorded two albums in 1979 and 1981 but who created an original funky fusion with Bété langage. A selection of four amazing tracks recorded in Abidjan on two different records label called War Records and As Records. The music here is a mixture of Funk with heavy basslines, traditional percussions, funky guitar riffs, nice horns section and lyrics in Beté. The song ‘Demonde’ is inspired by harmonies of the famous ‘Dance to the Drummer Beat’ by Herman Kelly. Those two rare records were found by Afrobrazilero (aka Djamel Hammadi) and never appeared on the vinyl market. It’s almost impossible to have info about this singer and composer neither the musicians involved in the recording sessions and most of the traces of the recording session were lost by the labels.

Strong limited, blue colored and handnumbered run. A&S aka Dimi Angelis and Jeroen Search are back on their own imprint. High quality organic spaced out techno at its best.

A&S aka Dimi Angelis and Jeroen Search are back on their own imprint. High quality organic techno at its best.

Dimi Angelis & Jeroen Search continue on their very own imprint A&S with an outspaced and hypnotic 4 tracker.

With integrity and passion at the core of M_Rec Ltd’s mission, it’s not surprising to see the relationship between the label and uncompromising techno veterans Dimi Angélis & Jeroen Search continue. M_Rec Ltd. welcomes back the dutch duo with a release under their A&S alias. Through the vinyl-only A&S series, the two producers have continued to deliver a consistent number of solid dance floor oriented tracks, supported by an infinite number of artists.

Dimi Angelis & Jeroen Search back on the road with 3 trippin and detroitesc techno tracks on their A&S Records.

Dimi and Jeroen delivers again a fantastic single with 3 amazing and mind tripping tunes on their label A&S Records.

For A&S003 Dimi Angelis & Jeroen Search meets noone else than S100. The result is distinctive. Monster tunes for special moments and special people.