Eye Can See The Darkness (In The End Of The Tunnel) is a shot of light in the dark cavern of a broken heart. Blinded By The Lights rips apart the heart-string orchestra rather than just pulling on the strings. A love ballad lost in the haze of the mid-summer, faded to blue and repackaged as a gentle and tender winter anthem. Sharing the A-side with the lucid dreaming of Jeremiah R on the drum-heavy remix. On the flip, I Am Not Him is a filter-squelching, bass-slapping meander into green haze territory, that finally erupts into a swagger of familiar Detroit-channeled drums and steady faded pads. Outernet grumbles up the black-hole cosmic radiation with an industrial-tinged number that plunges the depths of deep-space. Proper growling and clanging synths to add the right amount of raw, just at the end. 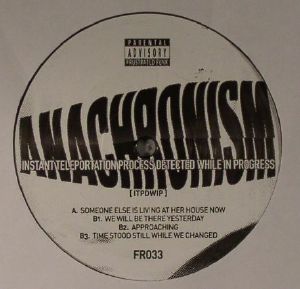 “An anachronism is a chronological inconsistency in some arrangement, especially a juxtaposition of person(s), events, objects, or customs from different periods of time. The most common type of anachronism is an object misplaced in time, but it may be a verbal expression, a technology, a philosophical idea, a musical style, a material/textile, a plant or animal, a custom or anything else associated with a particular period in time so that it is incorrect to place it outside its proper temporal domain”. Frustrated Funk welcomes Heinz Kammler’s Teleportation Process Detected While In Progress [ITPDWIP] project to it’s roster.