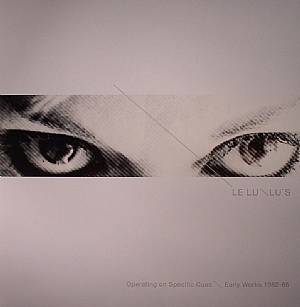 LeLu/Lu’s were an early to late 80’s electronic/synth-based project based around Deni (in the early 80’s known as Yo-Yo and nowadays known as Timekode). In 1985 they released a fantastic 12 song tape on Unlikely Records (URT91) called ”Operating on Specific Cues” which forms the basis of this 25 track 2 LP-release While the tape is still rather unknown to fans of synth music, the three 7”s released from 1985-87 (on Alain Neffe’s Insane Music as well as Possum and R&D Records), with the outstanding tracks ”Spaceman Bassman”, ”Africa” and ”Fragile Thing”, are better known to the minimal synth/wave community and collectors of 80’s wave and minimal synth vinyl.