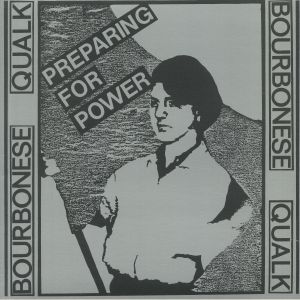 Mannequin Records and Platform 23 come together to start a series of stand-alone reissues of the music of post-punk / industrialists Bourbonese Qualk, starting with their 1983 album Laughing Afternoon. Formed in Southport during the late-70s, the band came to prominence out of South London’s squat scene via their own Recloose Organisation. Early releases including the band’s first experiments put to tape and the now highly sought after Sudden Departure compilation featuring luminaries Colin Potter, Eg Oblique Graph (Bryan Jones) and Lol Coxhill, laid the foundations of their burgeoning sound. Recorded and produced at the Recloose Studios in Camberwell in 1983, Simon Crab, Julian Gilbert and Steven Tanza infused their music with politically charged atmospherics, instrumental exploration, heavily laden reverb and dub, all projected by drum machine rhythms to assemble a musical collage which encapsulated strands beyond contemporary music. Track titles decipher little, as with the music, a discourse not belonging to a set style or movement, but crossing boundaries of supposition, pushing distortion and outernational leanings towards something else, a primordial discant. While tape loops warp the ears and spoken vocals propel songs like Blood Orange Bargain Day and To Hell With The Consequences and contrasting guitar acoustics pierce the mood on Qualk Street and Spanner In The Works, the overall embrace is claustrophobic, embedding a foreboding for the times. This unique, indulgent, cross genre melting pot where pounding rhythms, wailing trumpets, mournful melodica and electronic pulses all spiral in a contagious dissonance that heralded Bourbonese Qualk to the wider world.

The 2nd collection of songs selected from the Alternative Funk series released Vox Man and VP 231 Records. Originally appearing in 1985 across 1 vinyl and 2 cassette albums these cult collections have long been in collectors (and bootleggers) sights and finally see the first official reissue. The series covers the weird, wonderful, esoteric, exotic and quirky sound and puts them in a reset context that immediately gives clarity of the original’s curation. This volume opens with some DIY electro stealers, first with Dee Nasty’s Orientic Groove, where the early French hip-hop pioneer lays down a battle commence of beats, slapped bass and YMO keys, before the second offering from Scoop! and their rap attack, juxtapositions the past series and leads to label heads Vox Populi! & Man and their continued look at the rudiments of cut up manipulation and scratch techniques. The avant rappears with 3M’s percussive marker and legendary Amus Tietchens’ is ever challenging, before Melsjest’s post-punk meets the Weirmar possibly steals the side as Vox Pop spoken outro joins those (micro)dots. The cult of Randall Kennedy returns with another garage-fuzz gem. His stories for wackos’n’weirdos end all too soon and are followed by Liquid Liquid’s Dennis Young, diving deep with Intuition, before Stanalis returns with another winner. Bene Gesserit is a killer and welcome addition, before Kosa return with more industrial clippings and volume 2 heads to the door with Capital Funk’s electro-punk bomb – possibly the series champion – while the slap bass-scratch of California’s Psyclones leads to a music hall end in the homage to mum’s favourite, Chukk. What these Volumes again highlight is how the DIY aesthetic of so many independent labels was supplemented and spread via collections of friends, contemporaries and often, literally pen pals, to mail in their offerings that are then picked for wider ears. While some of these artists have become known, just as many are who and whats, but they sit side-by-side as warranted and often killing the scene of what Axel and co sought to be…the Alternative Funk.

Platform 23 launches with the reissue of the seminal Alternative Funk compilation series, presenting a selection of music across 2 volumes. Known for the highly heralded “Folie Distinguee” album in 1985, what is often over looked is the fact there accompanied 2 further “Alternative Funk” cassette compilations that same year. Coming within the Audiologie series on Vox Man Records, these “Various Artist” selections were indicative of labels that sprung up in the early 80s around the DIY post-punk scene. As founders of Vox Populi!, Axel Kyrou and Francis Man, working with close associate Pierre Jolivet’s (aka Pacific 231) VP 231 label, released a number of cassettes, 7″ and LPs between 1982 and 1988, as much to self-release their own music as to push new or contemporary artists. Here then is a snapshot of the Alt Funk albums, selecting songs that avoid recent or upcoming reissues, to dive deep in the series from industrial to cold wave, proto-dub percussion to avant spoken word pieces. Featuring the likes of Son Of Sam, Philippe Laurent, Fist Of Facts – with a long lost first ever recording – and Human Backs, stepping out from semi-cult name dropping to sit alongside unknowns and never heard from again in Scoop!, Kosa, Zoohtee and the wonderful Randall Kennedy. What is apparent is an idiosyncratic nature to the selections. In the same way many independent labels of the time – such as Auxilio De Cientos’ Terra Incognita volumes or Final Image’s Nightlands – created a label snapshot by pulling together far and wide contributions but retaining an overall ‘sound’. The Volume 1 and 2 reissue achieve that, mixing experimental with electro, post punk with noise, to offer more than the sum of their parts – an Alternative Funk.