Four Italo bangers, by none other than the infamous Professor Genius also known as Jorge Velez. The A side of this EP explores the sunny side of life with two lush melodic gems, where as the B side delivers two bass driven dance floor killers.

The acid Arabic wind has not finished blowing. After the warm welcome of our Collections EP01, Versatile proudly present four new tracks for eclectic and demanding dance rooms. Once again, Guido & Herv from Acid Arab deliver one track and have asked producers from all over the world to contribute to the project. This time by Legowelt, Dj Gregory (Headcore) Professor Genius, Dj Gilb’r, Acid Arab & Shadi Khries. 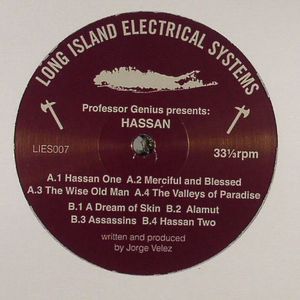 Composing an entire electronic album around the notorious 15th Century Cult Of Assassins, New Jersey based producer Jorge Velez, better known as Professor Genius, has created a unique and ambitious piece of work, under the guise of “Hassan”. Largely based around layered atmospheric Arabic-styled synth work and sparse percussion throughout, Hassan employs an entirely electronic palette to bring listeners into a secret world filled with darkness, drama, triumph and chaotic dissonance. The release includes also remixes by Steve Moore, Marcos Cabral and Steve Summers.