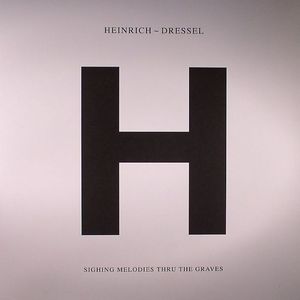 New release of Heinrich Dressel aka Valerio Lombardozzi, mind of one of the best Italian techno-electro labels around, MinimalRome. Heinrich Dressel is finally celebrating the use of vintage synthesizers and driven electronic machines, holding elements of electro and ambient at the same time, but breaking from the genres too, deeply inspired by Heinrich Dressel, the pioneering German archeologist sent to study in the holy city in Monte Testaccio, who drew what is now a major tool for study of Roman amphorae, the ”Table of Dressel. Heinrich Dressel is placed in a sort of limbo where John Carpenter meets Drexciya, a sonorous journey through the darker side of the electro, taking the commands of the Elka Synthex, one of the most impressive polysynths in the history of music, planned and manifactured by Mario Maggi in the early 80s, as the commercial brother of the MCS70, synth that gave birth to a masterpice album like ”Automat”. “Sighing Melodies Thru The Graves” musically speaking can be described as a captivating hybrid of styles, mixing the chilling-menacing mood of the 70s / 80s lo-fi funkadelic horror soundtracks to outerspace synthesised soundscapes in a pure classy vein. This is cryptical-kosmische psychedelica with a nice electro retro touch and avant-minimalist vibes.