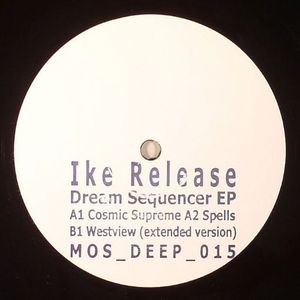 Following on from his increasingly essential work as Innerspace Halflife, Ike Release steps out on his own for a new three tracker on MOS Deep that finds the Chicago producer in a bullish mood. Opener ‘Cosmic Supreme’ is a moody march across the surface of a planet far from here – typically raw, bobbling drums set the tone as a frazzled and drawn out synth line winds right through its core from start to finish. ‘Spells’ is backlit with an ethereal synthy glow as another thick analogue line takes the main focus of the track, all the while as nebulous percussion floats about like a cloud of dust in the background. Finally, ‘Westview’ is a little more propulsive, driven as it is by a lashing, rubberised bassline that sprays about freely, contained only by the itchy and more regimented hi-hats that slice up and down around it. Despite there being a sonic denseness to all three tracks here, a certain emotional gravitas always lurks with in: be it one of introspection or reflection, they are difficult to ignore.