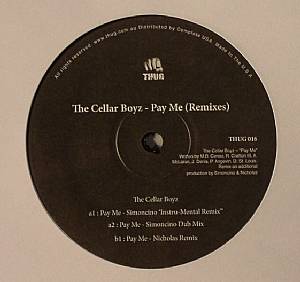 The Cellar Boyz ‘Pay Me’ is taken from Ben Cenac’s timeless ‘Cozmic House E.P’ on Thug Records. Pay Me which was recorded in 1986 is the only track from the Cozmic House E.P that had available parts. The stems for Deeper & Deeper, Seems To Me & Who Loves You were never recorded. This was due to the fact that all of Ben’s projects through out the ‘90s were tracked MIDI only at mix down, with only the vocals being recorded to tape. Thug would never have had the opportunity to release Ben Cenac’s Cozmic House 12″ if it had not been for Simoncino. Simoncino did all the A&R for the record. A gift not only for Thug but any fans of Ben Cenac’s amazing productions. With that in mind, Simoncino has provided 2 remixed versions of Pay Me, alongside a remix from close friend Nicholas.

The Cellar Boyz – Pay Me Back Remixes [THUG016]