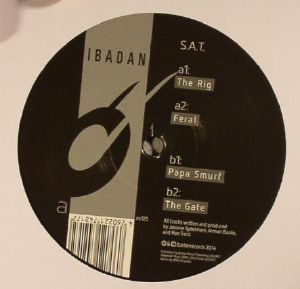 S.A.T. is the new production unit formed of Jerome Sydenham, Aybee and Ron Trent, three individuals whose respective discographies command instant respect. What apparently started as a simple dinner one night has grown into a full album between the three who evidently struck on a studio chemistry that warrants further material on the strength of this eight track album. Issued by Sydenham’s Ibadan label, SAT lives up to the sales notes billing as “loose and organic” and cuts like “The Gate” and “She Was” have that timeless quality one expects from a project Ron Trent is involved in. It all feels remarkably cohesive despite the fact the trio completed the album in under three weeks.