Aybee makes his debut on Molly’s newly launched RDV (Recit de Voyage) with the label’s second release. The ‘Nexus’ EP follows the DJ/producer/filmmaker’s 2016 LP ‘The Odyssey’ on his own Deepblak imprint and recent 12” ‘The Motion Syntax’ for London’s DMK. Aybee is mining a deep & hypnotic house sound to maximum effect, employing the tribal drum patterns, hypnotic synths and signature grooves that helped establish the Deepblak sound. The trio of tracks make for a perfect follow-up to RDV’s debut from Prophets of a New Generation, and fit beautifully within the trademark deep, subtle & groovy style of the Parisian DJ & Rex Club resident Molly, who herself is quickly establishing herself as a label owner with her own unique vision.

The London based DMK label returns with the Deepblak Recordings label head honcho Aybee, with four tracks of deep house on the ‘Syntax EP’.

Deepblak’s Chief Alchemist Aybee come with his fourth full-length studio album, ‘The Odyssey’. As befitting its grand title, this newest long-player finds him concerned with personal journeys: both the personal one that has brought him to this point – living in Berlin, 15 years since founding Deepblak in his native Oakland – and the one that beckons for him personally and creatively in future: Aybee sees himself as being halfway up a mountain, looking back on where he has come from, and to where he will be headed next – both concepts play a profound role in the emotional textures of the album, which in true Deepblak fashion draws from jazz, deep house, techno, hip hop, blues, experimentation, cinema, space, time and infinity. ‘The Odyssey’ represents a change-up for AYBEE in several ways, forged from a desire to keep expectations at bay and throw something of a curveball for those who felt they had him pegged: “a good pitcher always keeps you off balance”. This newest work saw him deliberately limit his sound palette in a creative exercise that challenged him to create a full body of work from a small pre-selected library of sonic elements. While this was restricting in some aspects, the approach to – as he puts it – “throw the ingredients in a basket and cook with it later” gave him more freedom to focus on atmosphere and groove instead of putting hours into trying out different options – “otherwise I’d still be in the studio now trying to work out which hi-hat to use on the third track!”

Armon ‘Aybee’ Bazile is undoubtedly one of electronic music’s most consistent performers. He’s barely put a foot wrong since making his debut in 2004, and continues to deliver high-grade material on a regular basis. Predictably, there’s plenty to get excited about on this 12″, too. “Man Over Machine” is a winding, constantly building gem, with rising and falling, spaced out melody loops riding an off-kilter techno rhythm. On the flip, you’ll find the deep space chord progressions, delay-laden electronics and deep tech-house grooves of “Build Them (Solstice Mix)”, the intricate pianos solos and Soichi Terada style deep house vibes of “Legacy”, and the off-kilter deep house/IDM fusion of “Melted Chains”.

Aybee returns on his always reliable Deepblak imprint to give us another dose of the real proper deep stuff. Just one side on this release from the man now in Berlin, but it’s quality not quantity we say. “The Heart Of The Sun” is a raw and tunnelling cut with eerie synth melodies, a killer bassline and dark analogue drums giving this track its momentum and its edge. A fine taste of a long-mooted new Aybee album due on Deepblak in the coming months.

END_OF_DOCUMENT_TOKEN_TO_BE_REPLACED

Always showcasing different sonic tapestries, Aybee’s debut on Burek holds true to this theme. Under “The Bazile Republic” moniker Aybee presents the “Strange Visitors EP”. “The Bazile Republic” brings to bear the story of a strange island, a celestial visitor, and mysterious doctor. The story is set to be played out over several releases , and sees its 1st installment via Burek. The tracks entitled “Strange Visitors”, “Motion Of Attraction”, and “The Sacred Smoke” comprise a fusion of dance-floor rhythms that drive, and lift.

Aybee follows up the experimental musings of the Sketches Of Space LP with an EP directed in large part directly at the dancefloor experience. In what could be called Aybee’s first Techno outing, ‘The Alchemy EP’ sees Aybee offering 3 tunes which mesh rhythm, drive, and sonic colorings. In line with the Deepblak creative ethos, and rounded off with a simple directive.

S.A.T. is the new production unit formed of Jerome Sydenham, Aybee and Ron Trent, three individuals whose respective discographies command instant respect. What apparently started as a simple dinner one night has grown into a full album between the three who evidently struck on a studio chemistry that warrants further material on the strength of this eight track album. Issued by Sydenham’s Ibadan label, SAT lives up to the sales notes billing as “loose and organic” and cuts like “The Gate” and “She Was” have that timeless quality one expects from a project Ron Trent is involved in. It all feels remarkably cohesive despite the fact the trio completed the album in under three weeks.

Fred Peterkin’s fourth solo LP on his own Soul People Music creates a mood that carries a message embedded in the rhythm. Carefully woven hypnotic dialog flows threw a subdued mist of color and textures. Such subterfuge beckons the listener to yield to its suggestion as the story unfolds. Codes and Metaphors features the talents of Minako Sasjima Of Japan, Lady Blaktronica Of SoundBlak recordings, Malena Perez of DeepBlak and Christina Wheeler. The Ideas are simple the rhythms are simple the music is real. The vibration is Soul People that is the foundation of Black Jazz Consortium “life threw sound”. This is the third part of Codes And Metaphors.

Yoruba presents a selection of diverse and interesting remixes for Torquato and Boghosian’s acclaimed debut. First up, Afefe Iku delivers a much deeper, weightier version of Paradice laden with heavy synth stabs and woody percussive elements. Aybee takes When U Touch Me nto much deeper realms, stripping back the original groove . It’s remarkably simple but flawlessly executed, the chord motif working effortlessly alongside the crisp hats. Atone tackles Zulu Girl and in the process unravels a much more mechanical track, a massive mid-tempo thud dominating over delayed cymbal crashes and ghostly vocals.

This release marks the beginning of a fruitful and exciting new partnership between secretsundaze’s James Priestley & Marco Spaventi. Secretsundaze fuses 128 BPM house and techno with elements of UK bass, while taking cues from Cajmere and Chicago. ‘Baia 2012’ refers to the late 70s Cosmic scene in and around Rimini, particularly Baia Degli Angeli where Daniele Baldelli was resident. At the time, a patchwork of styles was being presented in a wild but coherent way. This unusual and organic sounding offering is backed by a Fela Kuti percussion loop, a massive bassline from a Prophet 5 synthesizer, original drum machine work, vintage synths and varied jazz riff samples. An unexpected Larry Heard inspired breakdown and searing sax line steps it up a notch and takes the track to a whole new level. If the Baia scene were still in full swing, this production would be the perfect audio representation of its evolution. 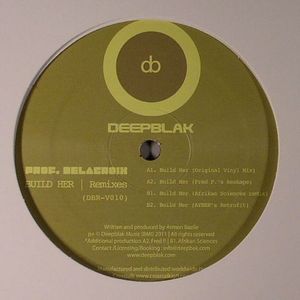 Aybee shows his other side with the 7 short tracks on this EP. While the aural palette is similar to his 4 to the floor work, the beats here leaning more to the hip hop side. Funky & deep, the way you’d expect, but with a twist.

Aybee teams up with Miles Sagnia for two cuts each on the Eternal Radiance EP on Sagnia’s Atmospheric Existence imprint. Taking over the A-Side, Aybee serves up “A Glance” which oozes with classic US house charm. Acoustic piano chords and are layered on top of a chugging bassline and electronic melody, tightly produced and melting in its warmth. “Isis” gets heavier with a more underground vibe of crashing echoes and tinny drum arrangements. On the flip, Sagnia’s “Journey 2 Forever” fuses multi-tracked choral chants, the impeccable sound of the Hammond and a rapid techy groove. His Visual Foci Reprise of “Journey 2 Forever” ditches the chants, instead opting for a sensual male vocal.

Chief Alchemist Aybee kicks it off with an 11 min voyage into deep astral soundscapes. ‘N#ggas and Space Machines’ plunges into late night space travel, and finishes off with the smoothed out vibes of ‘Steps’. This is some seriously beautiful futuristic house music.

The first single release from Jus Ed’s new album “Next Level” with remixes by Levon Vincent and Aybee. Levon does a nice Piano driven mix where Aybee goes into the deeper areas of house music.

Jus-Ed “I didn’t know of Aybee until recently after I met him through Fred P. Fred had played this classic track called “build her” by Delaroix which turns out to be Aybee! This EP bridges the gap between Afro House and Tech House. Guaranteed to move the crowd!”