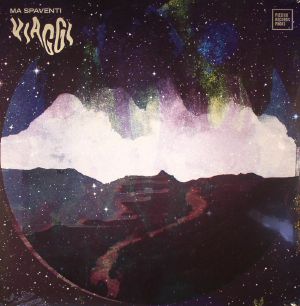 Released by Pizzico for the first time in 2009 with the moniker “Erre”, Marco Antonio Spaventi was one of the most pleasant surprises about what an excellent techno producer can do with his beloved background: Italo disco. Influenced by soundtrack masters as Vangelis, John Carpenter and most of all Italian maestro’s like Nico Fidenco, Pino Donaggio, Francesco De Masi, and appearing in the sky like a laser beam in a post-atomic Bronx filmed by Enzo G. Castellari, the positive first album of MA Spaventi called “Viaggi” is landing. A real journey into obscure worlds, dirty streets, atomic sunsets, broken hearts and analog feelings, a blessing for your most romantic and cinematic essence. Could this folding full length fit the modern dance floors? Maybe It could be better for the outcast clubs of a near future: synths atmosphere are sweet and pressing at the same time, the melodies and beats fit together in a succession of deep emotions, the “tape” sounds old school and totally irresistible. Pizzico is proud to present MA Spaventi’s VIAGGI: nine exclusive tracks for a brand new album, invoking and evoking dusty Italo vibes, analog synths and written soundtracks for unwritten movies.