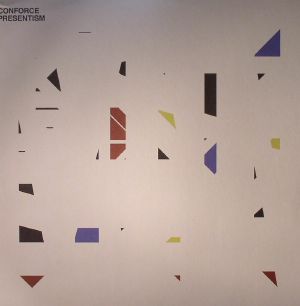 Boris Bunnik is back with a brand new album under his Conforce guise. Entitled Presentism, is his fourth under this alias and proves once that this most prolific talent is still very much an evolving producer. Presentism is more organic and less dystopian and mechanical than before, with a light hearted sense of joy and vivid musical patterns lingering long in the airwaves, and as such harks back to earlier full lengths like Machine Conspiracy, which leaned more on Detroit rooted techno. It is a collection of diverse musical compositions that leans more on musical structures than technical obsessions, and where his last effort Kinetic Image was a tightly programmed conceptual thing, this LP is a much warmer, more organic and aquatic bit of floating modern techno. As such, you get the sense Conforce is back and having fun with his music making once more, free from any rules and instead just crafting what he feels inside.

The expertly designed sounds of this album float and drift in subtly uplifting ways, right from the off. It is a diverse collection sounds with a fine sense of mood through, and that is what ensures it makes sense as a greater whole. At the same time it retains that signature Conforce sense of rhythm, underwater atmosphere and vivid seascaping that really takes you away from the world in which you live. Some tracks like ‘Realtime’ are slow and moody, others like ‘Erased Connections With The Past’ are more propulsive and physical and those such as ‘Monomorphic’ are heady, hypnotic affairs that make for beautiful electronic soundtracks