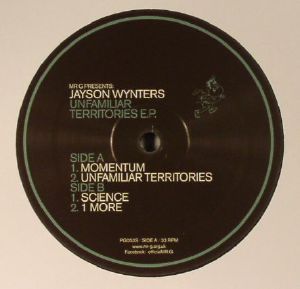 The G man found himself a protege. After the odd 50+ solo releases offered through his Phoenix G imprint Mr.G has found himself a young producer that has a style that connects with the Phoenix G output thus far. Mysterious Jayson Wynters offers a 4 track record that is hazy, technoid and threads into deep territories every now and then. ‘Unfamiliar Territories EP’ opens with the deep down perc jam named ‘Momentum’ a moody dubbish track that sets the tone for things to come. The title track offers a more emotive ride that’s being supported by tough saw basses and windy pads that float throughout. The B side openen Science is a tough house cut that is reminiscent of the glory days of US deephouse and sounds as a solid classic rather than a new cut. The closing down bit ‘1 more’ is the same story. Firmly produced drum patterns with classic bass sounds and hazy pads.