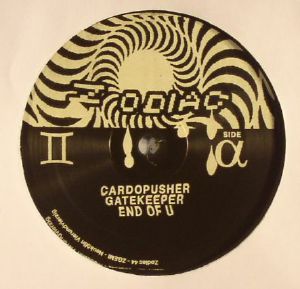 In the place of the eternal blazing sun there exists an underworld, a dark and cold space of interlinking caves and dank corridors. Occupying the subterranean land is an army of worker drones, busying themselves with a never ending series of tasks, both laborious and mechanical. Once a task is completed, a report is filed and then sent to the Gatekeeper. The owner of the keys is the one they call Cardopusher, cruel and unrelentless. Sitting atop his throne of screws and iron, he patiently waits as his minions build the weapons he seeks to finally overthrow and conquer the people of the overground. ZGEMI is the sixth of 12 releases. One for each sign of the stars and then Zodiac 44 is forever dead and gone..