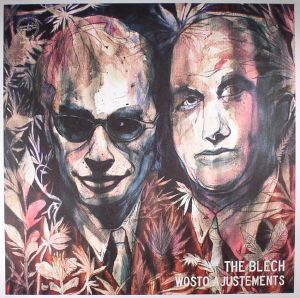 For the first release coming in 2017 Macadam Mambo strikes very hard with a very special EP of radical dance music by the German band The Blech revisited by Hambourg’s based artist Wosto. The Blech released 6 LP between 1985 and 1996. Their albums have become a treasure-trove of extravagant, groovy dance hall artistry. The forcefulness with which The Blech flung their conviction from the stage into the audience was at once hypnotic, irritating and erotic. Here Wosto has selected two tracks from the Zip Zip LP originally released in 1987 (Nichts Wie Vorher and Zip Zip) and one from the Ich Wollte Meine Schuhe Zerschneiden LP (Die Einame Trane) released in 1989, and transform them into strong powerfull dancefloor cuts. Be sure of the efficient of the product, no need to talk more, let the music speak by itself.Special mention for the magnificient artwork of Lyon’s based artist Hugo Charpentier from the Mauvaise Foi collective.