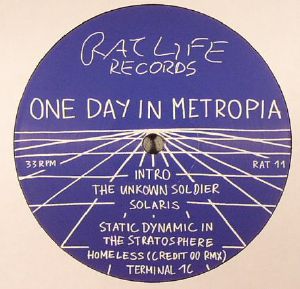 Rat Life is back with more unheard material from the hidden bedroom studios of East Germany. One Day In Metropia – is a project that was active around the year 2008 – operating out of the concrete suburbs of Dresden. Its main focus were live appearances in the citie’s underground electronic music circle. Just a few signals of its enormous creative output were published on various sound carriers to this day. So it was time to release some more of this large bulk of data that has been lurking on storage devices for years. Rat Life’s operator Credit 00 is proud to be allowed to contribute a remix version to this sonic document.