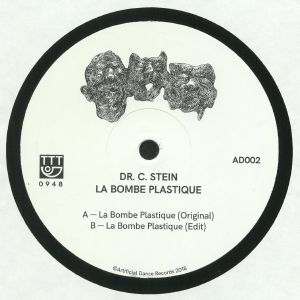 Artificial Dance has returned to the source for release number two. The 12” pays tribute to one of the most influential figures of Amsterdam’s original DIY electronic music scene, Hanjo Erkamp. During the first half of the 1980s, Erkamp had a hand in some of the most experimental and forward-thinking releases on the now legendary cassette label, Trumpett. Famously, he was a member of two of the label’s key bands – industrial outfit Doxa Sinistra and new wave combo Ende Shneafliet – but during the period he also recorded a swathe of solo tracks as C. Stein, most of which only saw the light of day decades later. ‘La Bombe Plastique’, a thrillingly spacey and futurist cut rich in proto-techno rhythms, intergalactic electronic motifs and drowsy choral vocals. For this timely reissue, the superb original version comes accompanied by a fresh re-edit created primarily for DJ use.