Techno veteran Adam-X dons his ADMX-71 moniker with three tracks of subterranean, cyborb, body music influenced slow grinding techno. Tense, textured, and ready to explode all three tracks explore the dark present and future we are heading towards, with track titles like Nuclear Hysterics and Dire Situation the music goes hand in hand with the modern day chaos unfolding daily. Properly heavy and dense there is still air letting the tracks breathe and develop as they slowly boil over scorching everything in their path.

Adam X is back with his third album release under his industrial guise, ADMX-71. Adam returns to the L.I.E.S. front with Coherent Abstractions, a brand new album of singular experiments that pull from every corner of electronic music’s landscape into a comprehensive and propulsive full-length. Coherent Abstractions pulsates with fractured rhythms, vacillating melodies and mesmerizing compositions that showcase Adam’s impressive history working in all aspects of the underbelly of electronic music. Noise and industrial elements seep into the album’s 11 songs, churning the cold and abrasive into feverish new territory. Though Coherent Abstractions operates primarily in sounds of solitude, guest vocalist Janina joins Bound and Broken for a rare vocal collaboration on an ADMX-71 track.

Adam-X should need no introduction as he and his brother, Frankie Bones, pioneered techno in a post-disco, pre-Guiliani, New York City through the late-eighties and onwards past the nineties with countless productions under their belts and throwing renegade parties throughout the 5 boroughs. Their record store Sonic Groove served as a hub for purchasing cutting edge electronic music from across the globe and was a meeting point for likeminded freaks throughout the city. Fast foward to 2014, New York City is a shell of what it once was, people have come and gone with the corporate infastructure having eaten its way through any and all subculture. No stranger to change Adam-X has adapted and explored numerous shapes and forms in his electronic music career from X-Crash, to Traversable Wormhole, to his ADMX-71 moniker, on this record, which he uses for more experimental and industrial productions. Througout the three tracks on this record, we get a subdubed yet extremely tense vibe as the carefully composed sounds push and pull against each other slowly trudging to the next destination. Subtle changes throughout, these tracks present a unique take on the traditional EBM sound which upon every listen one will discover something new. Highly recommended for those into the darker territories. 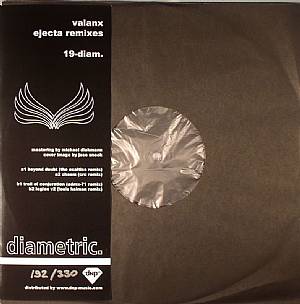 The second album by Valanx called Ejecta gets the remix treatment. Four artists, each with their own unqiue sound, have reworked their favorite track of the album and gave the music their own twist and sound. The Exaltics turns Beyond doubt into a dark brooding metallic industrial beast with a strong and dominant sub bass line that will damage your speakers. CRC, one half of the finnish electro masters Morphology creates a trippy psychedelic techno epic on his take of the track Chasm and showcases a masterpiece of drum programming and creation of atmosphere. On the flip, Trail of Conjuration gets the remix treatment by ADMX-71 aka Adam X. His version takes the tribal aspects of the original and turns it into a dark industrial techno drenched track that immediately lets you think of an old abandoned warehouse drowned in strobe light and fog and a massive rave taking place. Last but not at all least it is Louis Haimans turn and he creates a wonderful deep dub techno track out of Legion v2. The sub bass and deep chords are whirling and will hypnotize the listener with endless echoes and reverbs.